STUDY OF THE DYNAMICAL PROPERTIES OF SQUEEZE FILM DAMPERS

STUDY OF THE DYNAMICAL PROPERTIES OF SQUEEZE FILM DAMPERS

IT4Innovations cooperates with Doosan Škoda Power s.r.o., which is a leading producer and supplier of highly
efficient steam turbines (with a capacity of 10 MW to 1200 MW), technological equipment, and provider of services for the energy industry. The mutual cooperation is focused on research and development in the field of vibration damping using squeeze film dampers in rotary machines, such as steam turbines.

Undesirable behaviour in the rotary machines modes of operation, transmitted force, and maximum deflection of transverse oscillation can be significantly reduced by using damping elements placed between the rotor and its stationary part. This can be achieved by using a squeeze film damper. This damping element is created by connecting the hydrodynamic and rolling element
bearing, and its damping effect is generated by squeezing a thin oil film layer.

There are currently several variations in the design of squeeze film dampers. The research was focused on the state-of-the-art constructional arrangement of the damper. The main objective of the research and development process was to determine the stiffness and
damping coefficients of the oil film damper. One of the efficient approaches to determine these coefficients is
the use of CFD simulations. A standard workstation has proven insufficient for performing the required CFD simulations within a reasonable time limit. To illustrate this point, even when several hundreds of compute nodes were employed, it took about five days to perform
a single CFD simulation. The use of the IT4I HPC infrastructure as well as the established mutual cooperation between the experts based both at Doosan Škoda Power s.r.o. and IT4Innovations in the field of CFD calculations, dynamics of rotary machines, and
high-performance computing (HPC) made it possible to successfully identify the dynamic parameters of the damper. The acquired data and experience have been of great help to the industrial partner in efficient design of new constructional arrangements of squeeze film dampers.

“The mutual cooperation was aimed at research and development in the field of vibration damping using squeeze film dampers, which are employed in rotary machines for attenuating undesirable amplitudes of asynchronous components frequencies, and thus contributing to more flexible and smooth running of these machines. The cooperation with the IT4I researchers was very productive. They possess expert knowledge of modeling and
CFD calculations. Furthermore, they have at their disposal a high-performance computing machine, which has the potential to perform CFD simulations within a reasonable time limit. Thanks to these skills and competencies, the dynamic parameters of the damper have been successfully identified. In the future, we would like to build on this acquired knowledge in order to design a brand new radial bearing damper. The new design will be supported by CFD calculations and simulations performed by the IT4Innovations team. For verifying the computed dynamic coefficients, the test facility of Doosan Škoda Power s.r.o. will be used.” 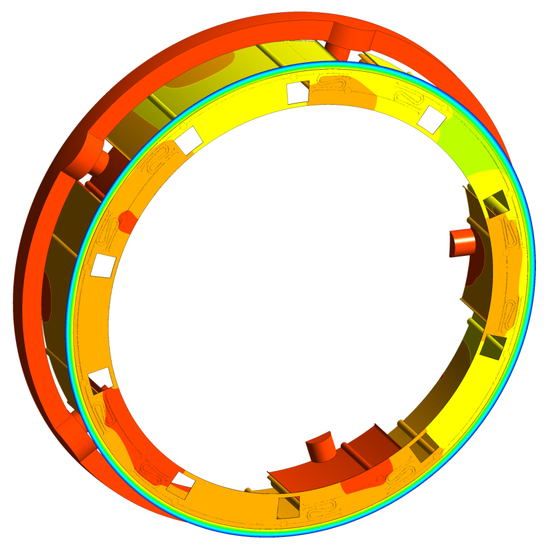