IT4Innovations National Supercomputing Center organized the 4th High Performance Computing in Science and Engineering (HPCSE) conference at Hotel Soláň in the Beskydy Mountains on 20th to 23rd May 2019. Nearly 100 experts and students from different parts of the world had the opportunity to exchange experience in the field of HPC technologies and other scientific domains that use these technologies or benefit from them. 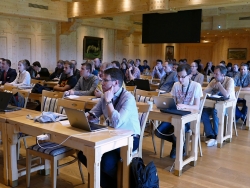 The conference featured renowned speakers from both the Czech Repuplic and abroad.

Jakub Kurzak from the University of Tennessee in the United States presented the SLATE (Software for Linear Algebra Targeting Exascale) software for exascale supercomputers of the United States Department of Energy, the development of which is led by Jack Dongarra, the doyen of the HPC and supercomputing world. The topic of exascale and software development is also the domain of Dominik Göddeke from the University of Stuttgart in Germany. Furthermore, Garth Wells from the University of Cambridge spoke about supercomputing for the solution of engineering problems, namely turbo machines. Andrea Bartolini from the University of Bologna in Italy presented his paper summarizing several years of research focused on innovative technologies for future green and intelligent supercomputers. Lubomír Říha from IT4Innovations introduced the participants to a new approach to the loading of datasets generated by unstructured meshes, for which IT4Innovations develops massively parallel solvers. 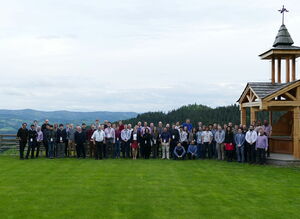 “HPCSE was a very enjoyable and productive conference. I have come away with several new links and even a few ideas. Several aspects of the conference stood out. I thought there might be a strong bias towards the details of high performance computing, but actually the presentations covered a wide range of interesting applications, from basic science to industrial design to movie rendering. The technical quality was high, and having short introductions from the poster presenters was very helpful, and I would like to see that format repeated in other conferences. One significant advantage of holding the conference in quite a remote hotel in the hills is that all the participants stayed at the conference venue, and productive discussions continued on well after the talks concluded. Another is that views down the valley (when it wasn’t raining) were very beautiful!” said Ben Cox, the Head of the Biomedical Ultrasound Group at University College London, which is involved in numerical simulation of acoustic wave propagation used in seismology and medicine.

The Conference proceedings of this year's HPCSE conference will be published in the “Lecture Notes in Computer Science” series (Springer). The previous edition can be downloaded using the following link https://link.springer.com/book/10.1007/978-3-319-97136-0

Created on: 27. 5. 2019
We use cookies to improve the functioning of our website. By clicking “accept”, you agree to their use.
Accept