IIT4Innovations National Supercomputing Center at VSB – Technical University of Ostrava introduced its installation of the NVIDIA DGX-2™ computing system today. The system is designed to tackle the most challenging artificial intelligence tasks, delivering over 2 petaFLOPs of performance for AI researchers. The ceremony was attended by the Governor of the Moravian-Silesian Region, Ivo Vondrák, Mayor of the City of Ostrava, Tomáš Macura, and the Rector of VSB – Technical University of Ostrava, Václav Snášel.

The IT4Innovations supercomputer family is growing to include NVIDIA DGX-2, which was supplied by M Computers, a Czech-based company. IT4Innovations is integrating the system into its infrastructure, which supports a broad base of users from academic, research, and commercial institutions from the Czech Republic and abroad.

"Our main mission is to enable Czech scientists to access high-tech technologies. This new GPU-accelerated system will allow them to keep up with the world in the field of artificial intelligence, which, together with digitisation, we consider to be key to the development of society. That's why we decided to buy this unique system” said Vít Vondrák, director of IT4Innovations. 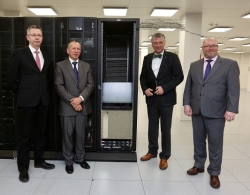 “The NVIDIA DGX-2 is the world's most powerful computer for AI calculations, and IT4Innovations is the first institution in Eastern Europe to install this system” said Serge Palaric, vice president of enterprise at NVIDIA.

NVIDIA DGX-2 is equipped with 16 of the most powerful data centre accelerators — the NVIDIA V100 Tensor Core GPU. They are inter-connected with revolutionary NVSwitch technology that delivers a total bandwidth of 2.4TB/s. The systems include 512GB of HBM2 memory. NVIDIA DGX-2 also offers 30TB of internal capacity on fast NVMe SSDs. Inter-connection to the surrounding infrastructure is provided via eight 100 Gb/s Infiniband/Ethernet adapters.

One NVIDIA DGX-2 can replace 300 dual-socket servers with Intel Xeon Gold processors for deep neural network training (ResNet-50). DGX-2 is powered by the DGX software stack — NVIDIA-optimized and tuned AI software that runs the most popular machine learning and deep learning frameworks with maximized performance. NVIDIA DGX-2 can also be used for traditional HPC workloads to deliver a theoretical peak performance of 130 TFLOPS.

The extension of the IT4Innovations infrastructure is supported by the European Regional Development Fund under the project IT4Innovations National Supercomputing Center - The Way to Exascale, CZ.02.1.01 / 0.0 / 0.0 / 16_013 / 0001791, implemented from the Operational Program Research, Development and Education of the Ministry of Education, Youth and Sports of the Czech Republic.

Created on: 4. 3. 2019
We use cookies to improve the functioning of our website. By clicking “accept”, you agree to their use.
Accept